LO: To explore adjectives and words to describe a star
Lesson begins with Miss Howells absent from the class. Mr Curtis to help with class. Pupils ring my phone but no answer. After ten minutes they try again and I answer. They have woken me up and I am babbling about a star. When I arrive I am still wearing mu pyjamas. I will exaplin that last night I saw something bright fall from the sky into my garden. I then dug it out of the ground and put it in a jar. The jar is then retrieved from my bag and the pupils see the ‘Star’. In groups pupils to explore the ‘star’. Using their senses and a large sheets of paper and write as many phrases and words they can think of to describe the ‘star’ as we do not know how long it will continue to glow. Groups to share with the class their descriptive words and phrases they thought of.
To write a description of the star
Discuss their mindmaps created. Have they used their senses to think of describing words and phrases? What is the ‘star’? Pupils to use the words and phrases they have produced to create a description of the ‘star’ making sure they use their senses to describe the ‘star’. Children to share their descriptions with the rest of the class.
To explore what the object was.
Discuss the ‘star’. What is it? Is it a star? Could it be something else? Using the ipads and large sheets of paper, pupils to explore what the ‘star’ could be. Using the internet can they find something similar?  Pupils to note what poosibilities it could be. What colours are stars? Is there anything else it could be? Meteors? Space dust? Alien goo?Children to share their ideas with the rest of the class.
To decribe where the object/star came from and what it could be
Pupils to discuss their ideas for what the ‘star’ could be. What alternatives are plausible? Pupils to use the ideas they have produced to write a short paragraph on what they think the ‘star’ is. Pupils to decide what it could be and where it came from. Pupils to use video to state their ideas regarding what the 'star' is. Children to self-assess their own work using the given success criteria and set themselves a target. 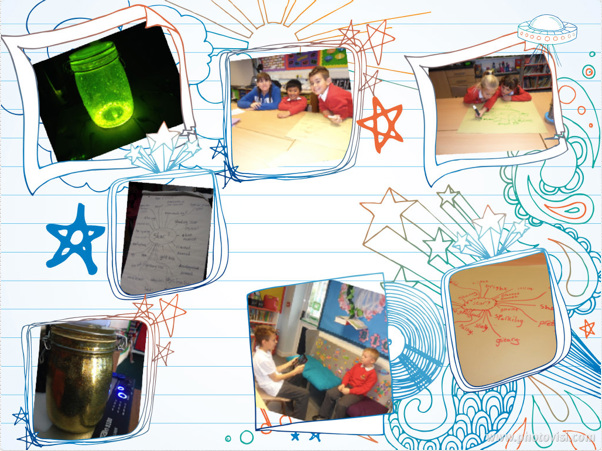 May the force be with you!

LO: To discuss the events yesterday and share thoughts and ideas.
Pupils to discuss the events of yesterday. Did anything strange happen last night? What could it have meant? (early assembly) During assembly there is a sound overhead like a large plane has gone over the school and crashed. Pupils to be evacuated from the hall where they find that an x wing fighter jet has crash landed outside the school gate. Pupils to take photos and video from a distance. The local environmental health and police are telephoned to ask for advice and we are told we can proceed as long as we wear protective clothes and gloves.Lots of discussion over the x – wing.
LO: To investigate the X-wing fighter
A group of children are kitted out in protective clothes and gloves. All the pupils then proceeed to the site of the crash landing. Pupils use video cameras, digital cameras to capture any evidence to help use find out all about this crash. Pupils open the x wing to find an ‘alien egg’ and some maps and sheets of numbers and letters. Also there is a QR code  inside the x wing. The pupils retrieve all the evidence they can find.  Children to share their ideas as to what this could be with the rest of the class.
LO: To investigate the contents of the egg
Discuss what we have found. What could it all mean? Look at all the pieces of evidence – maps of two areas, binary code sheet, number code sheet and cipher shift code sheet. What does all that mean? Look at the QR code – what is it? Use the QR code reader to find out what it is –link to a website but it is locked. What can we do? Children to share their ideas with the rest of the class.
LO: To investigate the contents of the eggContinue to look at the evidence. Pupils to help to open the alien egg. Inside the egg there is lots of goo and four stars with letters on them. Pupils to try to use the four letters to unlock the website. What combinations can they come up with? How many combinations are there? The four letters will not open the website.  Discuss codes and combination codes.

LO: To explore codes the coded messages in binary, number and cipher shift codes.
Look at the evidence collected from the x wing. What could the numbers and letters mean on the sheets. Examine the number sheet first. Could it be in code? What could it mean? Pupils to explore what the number code sheet could be. Is it a =1 etc. pupils to uncover what the secret message using the alphabet they uncover themselves. Discuss the message as a class, what does it mean?

LO: To explore the spacelab from techniquest
Children to share their thoughts with the rest of the class. Visit by Techniquest Starlab to discuss space and the universe using the inflatable dome.

LO: To explore codes the coded messages in binary, number and cipher shift codes.
Pupils to investigate the next code. Discuss 1s and 0’s and how they are used in computer codes sometimes. Use google to do a quick search using the first series of 1’s and 0’s. The pupils will uncover that it is binary code. Using the binary code alphabet, pupils to solve the coded message. Children to share their message with the rest of the class.

London calling to the faraway towns…

LO: To investigate maps using google earth.
Discuss the maps, hpw can we find out the area? Look at google earth and how to zoom in and out, find information and how to print screen shots to Microsoft Word.
hwb@cwm
Investigate and explore the maps that were in the x wing. Pupils to use Google earth to look for clues as to where they could be. Pupils to find out one map is our area and the other is Yiewsley in London. In that area there are three schools. Pupils to screen shot the information and show the distance and where these three schools. Also uncover their telephone numbers because we may need to contact them. Discuss which school could be the link and why?

LO: To discuss events and solving problems.
Just as we begin the lesson a message comes via twitter that a space craft has crashed in London with a link to a eyewitness video account. Watch the video of the crash landing in London. Where in London did it happen? Video will pinpoint Rabbsfarm Primary School. Pupils to discuss what to do next. Should we phone? Who should we ask? Telephone Mr Dacey (who is in a meeting) to ask for advice. Discuss the events and what we should do next.

LO: To solve problems and communicate with another school
As a class think of a list of questions we want to ask Rabbsfarm Primary School. Do they have maps? Codes? Any letters that might help us? Pupils to telephone pupils in Rabbsfarm Primary School to ask questions about their crash landing of the x wing. What evidence did they retrieve? Have they got any letters? Etc. Pupils to have another four letters to add to our four – what combination could this be? Discuss the evidence and what the eight letter code could be.
LO: To write a newspaper report on the crash landings. Discuss the features of newspaper reports with the class. What success criteria would they have? Create a newspaper report on the crash landings in both schools. Children to assess their work against success criteria.
LO: To unlock clues and explore and use website.
Pupils to explore the eight letter code. Pupils to unlock the website using the code combination. Pupils to uncover a secret website which has been created by the alien. The website has letters and a task to begin. Pupils to decide whether they want to accept the challenge of the alien. Pupils to tweet Rabbsfarm to ask them whether they are also up for the challenge. Children to share their thoughts and feelings with the rest of the class about this week. Pupils to evaluate the best bits of this week.